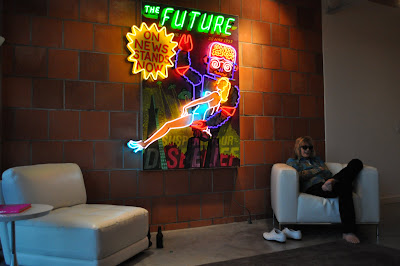 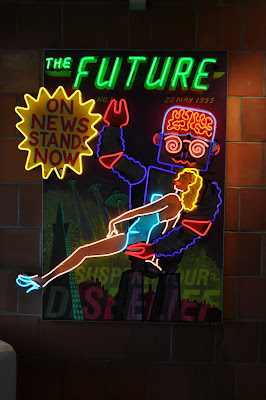 A quick trip to Chicago...

...and a few vintage signs on a cold, winter day: 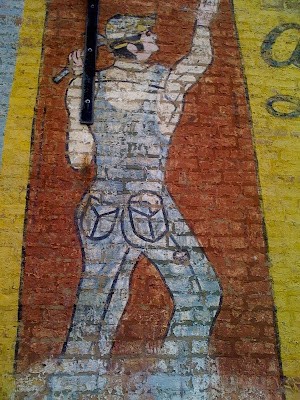 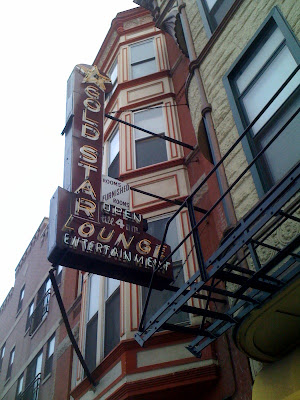 Lighting up the Town...

...interview in the Daily Texan by Julie Tran...

When local sign maker and artist Evan Voyles was a boy, his favorite sign was the Terminix bug. Perched on a pole at the intersection of 12th Street and Lamar Boulevard, the bug fascinated Voyles with its big, glowing lightbulb eyes, metal antenna and huge wings.

“It would turn, and it had an up lit in that kind of nemesis way,” Voyles said.

Voyles, 52, said he remembers getting pizza from across the street with his father, and then asking his dad to drive their Peugeot 404 around the block again and again to look at the life-sized insect. With the sunroof open, the bug looked like it was out to get them — and that was thrilling, he said.

That sort of thrill is what Voyles said he hopes to give Austinites as they drive or walk down South Congress Avenue. From the Homeslice girl throwing pizza dough in the air to the cowboy roping while riding a rabbit on top of Uncommon Objects, Voyles amplifies the quirks and spectacles of South Congress with his one-of-a-kind neon and vintage signs.

Voyles has made at least 500 signs with The Neon Jungle, the company he named after what his mother used to call Burnet Road in the mid-1950s, when it had raunchy neon lights.

A Yale University English grad, Voyles said writing made him to go out and search for stories. After attending college and dropping out of three law schools, Voyles went on the road, where his obsession with Americana took off.

He was driving in the middle of nowhere, north of the Texas border in New Mexico in March 1989 when he passed a little junk store, with things strewn across the desert, most half-covered in sand. He saw a half-buried sign with holes punched through the letters where light bulbs used to shine. It said “lunch,” and he bought it for $20.

To this day, the sign still works — Voyles occasionally screws in light bulbs and plugs it in just to make sure.

“It’s been lying on the desert floor for I don’t know how many years,” he said. “It was almost a hundred years old then when I bought it.”

While the lunch sign is by far one of the oldest he owns, the availability of the signs is much more important than the aesthetics, he said. Voyles realized the vintage signs were not as heavy or difficult to dismantle as he thought. And so he wanted more. He went out on the road again, salvaging signs from off the side of the road and those still on their original posts, often learning lessons the hard way.

Some of Voyles’ comical stories of near-death experiences while sign collecting include a face-to-face encounter with a scared owl and dropping and rolling on the desert floor after his shirt caught fire from a metal cutter.

Voyles makes signs using a process almost identical to that of 100 years ago. Using solely hand tools and no electric machinery, he cuts the steel frame, the sheet metal can that shapes the frame and the same tube supporters used in the 1920s.

While most people in the sign business come up as tradesmen who work for sign companies and then start their own businesses, Voyles is self-taught.

“I came in from a completely different point of view,” he said. “I came in as an artist, I came at it as a writer, and I came at it as someone who knew how to work with their hands, but really not knowing any of the tricks.”

In recent years, Voyles has shifted from making signs as an art form and a contribution to the community to using it as a way to feed his wife and kids.

“I wasn’t trying to put it in front of businesses,” he said. “My initial position is ‘Hey, this is art, and you should put it on your wall above your couch.’”

Though the signs Voyles creates on a regular basis are for local Austin businesses and advertisements, he puts love and care into his pieces so that in the end, they are public art.
His signs are actual art with words, said his wife Gail Chovan.

“He adds such beauty to urban landscape,” she said.

Much of Voyles’ day is spent meeting with clients, taking measurements or buying supplies. At night, after his twins have gone to bed, Voyles builds most of his signs.

Since the mid ’80s, Voyles has carried a Sheriff’s notebook with him at all times. In his tall, right-slanted handwriting, he fills it with banking notes, field measurements, sketches and to-do lists. It is in these notepads that the signs begin.

Five minutes after drawing up ideas for the sign, Voyles is on site.

“I have to be on site to get a feel for it, because it isn’t just me shutting my eyes and seeing it,” Voyles said. “I have to get a sense of where the traffic is coming from, where the sun’s coming down, what’s the best advantage of appealing to people and what works best with the architecture of the building.”

Often times, the client already has the graphic for they want in the sign. Voyles’ duty is to imagine it, all of which happens in an old grocery store turned studio.

For 17 years, Voyles has designed, welded and cut metal in his studio, which is so choked with junk that there is barely a strip of walkway.

“You’re more likely to break yourself than something,” Voyles said.

As a self-proclaimed hoarder since childhood, Voyles said he has learned to live in his own mess. From a tangle of neon glass to a Mrs. Santa Claus and a vintage Coke sign, Voyles’ studio is like a storage unit for a torn-down Coney Island.

“It’s kind of a primordial ooze of which my things are born,” he said.

The only thing Voyles does not handcraft for his signs are the neon lights. He outsources the job to a man in Lockhart, about 30 miles south of Austin.

“That’s a totally different craft,” he said. “Bending neon tubes is an art and craft, and it’s difficult to get good at it. You have to practice for years before you sell your work. I don’t have years, and I’m not interested in becoming a tube bender.”

On any given day, Voyles said he might touch on five different projects — from driving out an East Texas abandoned movie theater sign to a project for Upper Crust Bakery that he says is on the back burner at the moment. Early Wednesday morning, Voyles climbed on a 12-foot ladder in a pair of muddy cowboy boots onto the ledge of Wahoo’s Fish Taco. This was more of a doctor call, he said.

General manager of Wahoo’s Kelly Vann said he recommended Voyles to his boss to do the signs for the restaurant after seeing a few of Voyles’ signs on display at Austin Speed Shop.

He said they wanted the ceramic, yellow light bulbs to blink every few seconds, just like the vintage Terminex sign that spurred Voyles’ passion as a child.

...a new video make by writers and filmmakers from UT's Daily Texan:

Five Seconds from The Daily Texan on Vimeo.

Evan speaks to the crowd about his inspirations and the driving force behind his work: 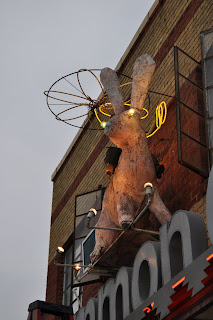 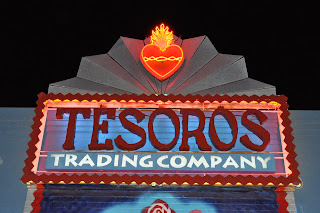 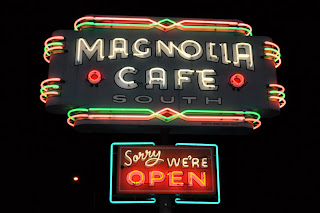 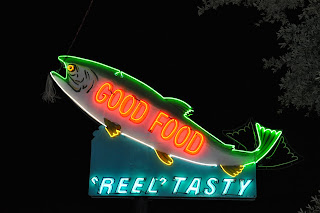 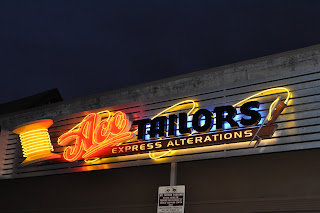 They're doin' the E Street shuffle...

It's only a block and a half down E Street, from the chameleon-green beach cottage to the liqour store.

Which turns out to be closed, so it's across the main drag, past THE PALACE (vaulted, waterfalled) of beach T-shirts, to the IGA grocery store. The parking lot is packed with everyone else who missed the liquor store deadline, plus the sunburned kids just out of school for the summer, and their divorced parents, and their retired grandparents, all seemingly on the make for something. Everyone seems to be in a hurry and yet they all move so slowly, checking each other out. Friday night in a small town on a small island temporarily awash with tourists.

I just want beer, bottled water, bugspray, and a corkscrew. I only walk away with half the list, because the store's shelves have been cleared. Then it's back down E Street to the Sea and Sands Cottages court in my flipflops and torn black jeans.

There's little deja vu for me in this town: the last time I spent here was forty years ago. In a polaroid photo taken on that trip, I'm eleven years old in a yellow cowboy shirt and wraparound sunglasses (both probably from the 1960's version of THE PALACE), eleven miles out to sea near the oil rigs, standing on the rear deck of a fishing boat, holding aloft a silver king mackeral I'd just caught which is half as big as me. Both the fish and I are grinning; all teeth.

The photo doesn't show the rest of my family: my sister, mother, and father. I seem to remember they were below deck, sea sick. But probably my dad was just getting a beer, or took the picture, or both.

Now I'm here with my twins -- son and daughter each about the length of that kingfish, and each grinning at the prospect of the Beach -- and my wife. It's our first family vacation together since we discovered Gail's illness and began the grueling treatment process. She's on a mission, I think, to take our kids to the Jersey shore of her youth, and this is the nearest comparable option. Without missing daily radiation. Or going below deck, sick of the journey and the prospect of the return trip.

The barefoot manager asks me if we plan on doing any fishing while we're here.

I tell him no. We've caught our limit.


And we're happy with our catch, despite everything. Our children shine in the sun, laughing and bouncing like the dolphins we hope to see tomorrow. And we're alive to see them. We have no real plans for this trip other than that.